This is a 3-month program from January through the Frozen Four for school credit (non-paid). Fan Media will train, develop and collaborate with interns as mobile video journalists for social news coverage this hockey season. This is for journalism, broadcast, digital media and sports marketing students from the 16 schools that have a channel in our app that participate in Division I NCAA hockey. Fan Media has 135 college team channels in our app and web site across all sports. 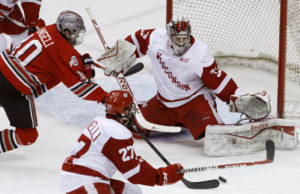 Fans, former college players and trained journalists make 30-second videos on their phones covering their favorite teams in their area from their point of view as social news coverage and compete each season to earn official status, money and media credentials.

Students will learn mobile video journalism as social news coverage in the field, get on-camera, cover high-profile sports news, build their mobile demo reel, and have fun. Videos can be shared from the app and web site into the News Feeds of Facebook and Twitter as well as Fan Media’s social brand pages.

Interested students can apply by installing the app http://apple.co/1HhY2QQ or making a profile on the web site http://fanmedianetwork.com/, and making one video 30-second or less video about your college hockey team. We will contact you in the app or web site from our Newsroom to set you up from there.