When I first started to watch college football, I remember I had one individual I idolized: Kirk Herbstreit.

I mean look at the guy, the starting quarterback and captain for the Ohio State Buckeyes, it seemed to me, he has the best job in the world. Saturday mornings he gets to be on camera and talk about what is happening in college football. That’s a pretty sweet gig.

The more I thought about it, the more I wanted to be Herbie. I can talk college football all day with people. Now with the excitement, drama and controversy of College Football Playoff, there is plenty to discuss. Should TCU (I was a WR on that team) have gotten left out of the inaugural College Football Playoff? Why does it matter how you win, as opposed to just winning? Does the committee look favorably upon certain teams due to their style of play, because the old coaches consider that to be passing the “eye test”?

But finishing my college football playing career, I came to a realization: there’s only room for one Herbstreit. Only one Rece Davis. There’s only one Lee Corso (thankfully). Or is there! We have over 460,000 NCAA student athletes competing in collegiate athletics this year. Granted, not all of them are looking for broadcast media positions after school is done, but imagine, say, even one in ten decided they wanted to talk on camera. That’s still close to 50,000 former college players who could offer great commentary, insight, analysis and coverage. 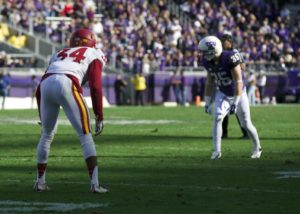 On-camera media analyst opportunities in the booth, on the sidelines or in the studio are minimal. But that is ok. There is a shift occurring in media. People are watching less TV and more mobile video. We are getting our news on social media. And we want to follow who we want to follow. Many former players already have big followings so they can further develop these audiences.

Former players can make videos on their iPhone as social news covering your former team, providing commentary, analysis, and interviews. This keeps you in the game and will lead to professional and commercial opportunities if you want them. Or you can just have fun, stay connected and cover something you are very knowledgeable and passionate about.

Many media companies are looking for moderated and targeted mobile video as social news. Mobile video makers can use their phone’s camera to record and upload videos. It is that easy, quick and inexpensive.

Fan Media Network is a social news company that is building a network of iPhone video correspondents for the top 250 NFL, NCAA, NBA, NHL, MLB and MLS teams across N. America. The app has 250 team channels. Fans and former college players make 30-second videos and compete to earn money, official status and media credentials. I bet we will discover and develop a lot of Kirk Herbstreits. http://apple.co/1HhY2QQ

Phil Taylor is a Media Manager at Fan Media Network. Originally from Southern California, Phil moved to Ft. Worth, Texas to attend TCU, where he was a walk-on wide receiver. Phil has been with Fan Media since May 2015.