Skip to content
Mobile Journalism For Sports in the U.S.

Mobile journalism is news gathering, reporting and storytelling that is produced, edited and published on a mobile phone. Why haven’t media companies in the U.S. shifted to mobile journalism? The state of the art of media isn’t so state of the art anymore. Who needs big, expensive professional cameras, and a camera person, and a TV truck, and post production facilities with a special editing room, and expensive editing equipment, and studios, and microphones, and satellites? It’s called an iPhone and iMovie video editing app. Thank you Apple! You can make and edit videos on your phone. We’re talking multiple clips of footage, music or natural sound and a voice over for storytelling. Mobile journalism is a disruptive, low cost media model.

This is bite size video coverage of news, games, events and moments made by the fans. Sports fans are already on the scene by the thousands, they are eyewitnesses and they are everywhere. You don’t have to deploy people or any expensive equipment. This is fan behavior that is already happening. Fans make videos/stories on their phones and chronicle what they see, who they are with, who is there, their point of view, fan interviews, commentary, and criticism. The iPhone is more than a phone. It is a computer. We’re talking HD video, video editing and distribution, everything anyone needs to get in the game of media.

A Shift Has Occurred in Media 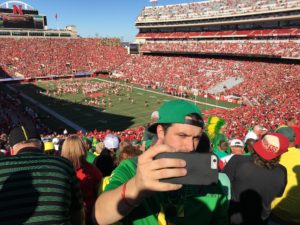 The old, tired, expensive media model called TV is being overtaken by video on our mobile phones, social media, and citizen video journalism. NFL TV ratings are down. Even soccer TV ratings in Europe are down. Over produced, sensationalism has turned off many sports fans. And the ultimate commodity is attention. People don’t want to sit around and watch entire games for three hours. Less is best, especially with young people. They are fine to watch a short recap, preferably in their News Feeds and move on. They are also fine to get perspective from their friends, other sports fans or non-traditional media types, definitely not talking heads or so called experts. ESPN and FOX Sports announced budget cuts, buyouts and layoffs in the past year or so. People are cord-cutting, cord-shaving and millennials don’t even get cable or a TV in the first place. People are watching less TV. They get their news on social media and rely less and less on traditional media and it’s never going back. Sports fans now prefer bite size video coverage of news, games, events and moments in their News Feeds by non-traditional media types and fan point of view.

Leagues, teams and broadcast media companies want to keep the old model as long as possible because the leagues, who work for the team owners, get billions in rights fees from broadcast media to be able to produce, distribute and sell advertising during the broadcasts and the leagues share the rights fees with the team owners. This is their biggest revenue stream. Team owners also get local TV rights fees from regional sports networks and they get to keep all of this revenue. And most big team sponsors use their TV ad budgets to fund their sponsorship deals. Team owner’s valuations are based on the size of the TV market they play in. This is why the Los Angeles Clippers were acquired for $2B and the Milwaukee Bucks were purchased around the same time for $550MM. Los Angeles is a bigger, more valuable TV market than Milwaukee.

Broadcast media companies are married to this model as they have long-term multi-billion dollar rights fees agreements in place with leagues that go out 10 years. TV advertising market is a $46B annual business. Though online video, mobile and social advertising are the biggest growth sectors in all of advertising, TV advertising is still the driver. Even advertising agencies want to keep the old model as long as possible. Some average TV commercials cost $250k to produce. You can produce a movie on an iPhone so you can produce a TV commercial on an iPhone for next to nothing. Fan testimonials and product placement is easy on an iPhone from influencers. This is called native video advertising. And high-end video production is possible to create ads on an iPhone. Ad agencies production departments will go out of business as native video advertising overtakes pre roll video and TV and traditional media continue to shrink. Native video advertising is a $3B business today and projected to be a $38B in a few years. Pre roll video is interruptive to the user experience and ineffective for brands anyway. People hate pre roll. There is lots of money at stake across the entire food chain of sports media – leagues, teams, broadcast media and ad agencies will hold on to the existing model. Facebook and Google have been the best at monetizing mobile. They get the first and the most digital ad dollars, period.

Mobile Journalism is Big in Europe, Not in the U.S.

Leading media companies like BBC and Al Jazeera deploy mobile journalism. Europe has historically been first and big in mobile, whereas the U.S. has been more advanced in Internet. This dates back to the mid to late 1990s during the dot com boom. The U.S. really pioneered the Internet and this historically has been the focus here. Europe was ahead of the world in mobile. Remember Nokia was a European company that once dominated the world in mobile. Then Apple invented the iPhone in 2007 and finally the U.S. and companies eventually focused more on mobile. Facebook went public in 2012 and most of their users and revenue was from desktop and nearly had no revenues from mobile and quickly shifted their focus and had significant users and ad revenues on mobile in 2013 and now this accounts for most of their business.

During all of this time Europe has stayed focused on mobile and that is why media companies over there have embraced and pioneered in mobile journalism and the U.S. is behind. U.S. media companies are trying to hold on to the old, tired, expensive media model because they make so much money on TV advertising and pay so much money in sports media rights fees. Their entire businesses depend on it. They do not want to shift to a much lower cost media model of mobile journalism until they are forced to or figure out revenues, which they will.

They say people will spend five years of their lifetime on social media. Social media had more impact on this year’s election than traditional media. People get their news on social media. Twitter controls breaking news. Facebook is massive and their distribution is unmatched. YouTube is the second biggest search engine and 136 hours of YouTube video is shared every minute on Facebook alone.

There is a mobile journalism company in the U.S. focused on pro and college sports called Fan Media Network. The network provides social news coverage of teams across the NCAA, NFL, NBA, NHL, MLB and MLS. The web site and iPhone app have 250 team channels. This is 45-second videos/stories from fan point of view. Videos are shared from the web site and iPhone app into the News Feeds of Facebook and Twitter as social news coverage. Fan Media Network give sports fans organization and purpose with competition (viewer voting) and incentives to cover their favorite teams in their area on their phones and compete each season to earn official status, money and media credentials.

Fan Media Network is the first media company in the U.S. and the world to be solely focused on mobile journalism for news gathering, production and distribution by mobile phones. And the niche is social news coverage.

The company is taking citizen video journalism, which was pioneered in 2007 by CNN iReport and The Weather Channel, and social media to another dimension and social news coverage is the focus.

Kirk Berridge is the founder and CEO of Fan Media Network. Kirk has several industry firsts in digital media and sports sponsorship. He has been an entrepreneur for 13 years.