We all have video production and video distribution capabilities with our iPhones. This enables iPhone video journalism or mobile journalism, also called mojo. Yes, I am an Apple enthusiast. And a sports and tech media enthusiast. Before we discuss tips and best practices for mobile journalism, let’s look at some recent historical inventions that got us here. The iPhone was released in 2007 but the first iPhones did not have video recording capabilities. 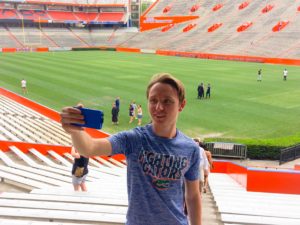 In 2005, I had the first Nokia phone with video recording capabilities and was among the first people in the world to make selfie videos. MySpace was the social network of choice back then. YouTube just came out. The way was starting to get paved for mobile journalism. In 2007, citizen video journalism was pioneered by CNN with iReport. And The Weather Channel followed suit shortly after. Both empowered viewers to upload videos and some were featured on-air. These videos were made with digital cameras or camcorders, not phones. In 2008, Facebook hit pop culture phenomenon status (it used to require a college email address to have an account but they expanded to everyone), and web 2.0 enabled sharing, and shortly after, the News Feeds were released in 2009 as a new product/feature within Facebook that replaced your Wall or Profile as the place where people were spending most of their time. Everything now came to people in their News Feeds. The App Store opened up to developers and apps became a focus. In 2010, Flip became a hot thing to have and it was all about people who liked to make videos but it didn’t make a phone call so they killed it. Then smart phones became ubiquitous and the video cameras became better. Then the Wi-Fi problem had to be solved at stadiums and arenas, which for the most part, it has. At this point, now anyone can be in the media. I am not talking about bloggers. Anyone and their grandma can blog. That is not unique content. I am talking about mobile video journalists. People prefer to watch video than read. And there is something about being on-camera. It makes people more accountable for their behavior and to present the truth. Bloggers and people who hide behind fake names on the Internet and on message boards and people making comments on YouTube, Twitter and Facebook are quick to be opinionated, critical and abusive and spread stuff that may not be factual. Traditional media is no longer what we rely on or pay attention to. People are tired of talking heads, sensationalism and overproduction. Social media empowered people to follow who they want to follow. When it comes to sports we all like our favorite reporters, broadcasters and commentators for one of three reasons: the way they look, the way they sound, or what they say. And we don’t like certain on-camera personalities for one of the same three reasons: the way they look, the way they sound or what they say.

People Get Their News on Social Media

Knowing that people are watching less TV and they get their news on social media, when producing videos/stories on your iPhone, keep in mind that short, quick videos are best. This means 45-seconds to 30-seconds is optimal. People want bite size coverage of news, games, events and moments in their News Feeds. That is enough. Then they want to move on. In this amount of time you can put together and edit 8-10 clips of footage for your video/story. This makes the coverage dynamic with multiple transitions and keeps the viewer’s attention. We call this social news coverage.

First, it is important to hold your phone horizontal so the footage is optimized for Internet video players. We have all seen a video on the Internet that is shot holding the phone vertically because it has those big black edges and the video is very small. Hold the phone horizontally. If you have good footage, you can turn it into a great video/story. There is an app to help edit video by putting multiple clips together in order to tell a story. iMovie from Apple is a great app that is easy to use. You can put music behind your video footage and do a voiceover to narrate and tell a story. This is all you need. You can easily learn how to turn down and adjust the volume of the natural sound, music and voiceover. Sound quality and lighting are important. Lighting is most important because iMovie allows a mobile journalist to do a voiceover, and that can solve any sound quality issue. Natural sound from the video footage can be used or turned down or completely turned off for a voice over. For storytelling, in addition to ordering your clips, journalism and newswriting have a simple formula. There is the lead, the bridge and the body. This is how news stories are written and video journalism can be produced. The lead is what the story is about. This is the who, what, when and where. The bridge transitions the story to the body of the story where the journalist goes into detail. A mobile journalist can open or close their video coverage by saying their name, name of the city they are in and the name of their network. For instance, this is Kirk Berridge in Dallas for Fan Media Network.
.

Kirk Berridge is the founder and CEO of Fan Media Network. Berridge is a leader in mobile journalism for sports in the U.S. He has been an entrepreneur for 13 years.