Fan Media Network has announced two of its first Media Analysts for the 2017 college football season.

Kellen Williams was as an Offensive Lineman for the Alabama Crimson Tide. He was part of a recruiting class that went 60-7. Alabama won three National Championships during his time in the program. 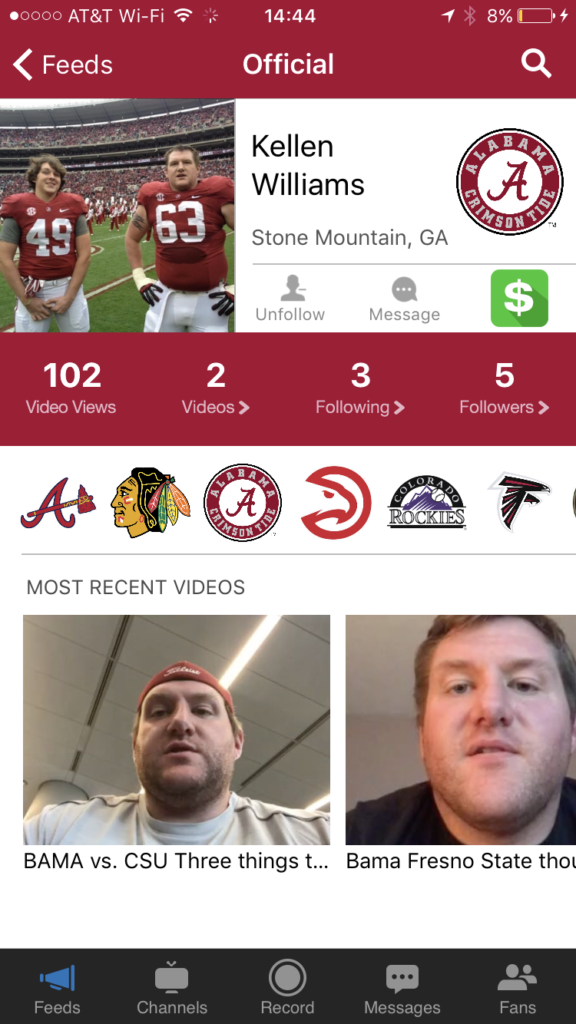 Andrew Davidson was a walk-on Safety for Alabama in 2011.

Former student-athletes can cover their school’s team on their phone from their point of view with analysis, commentary, and news reporting. The app and web site have team channels for all 128 schools that play to participate in the College Football Playoff, plus some of the basketball powerhouse schools. This is an opportunity for former players to stay in the game, be on-camera, cover high-profile sports news, build their mobile demo reel, stay connected with their former schools and fans, and have fun.

Fan Media will continue to add Media Analysts throughout the season. Those interested can get involved by installing the app http://apple.co/1HhY2QQ, and making one video 45-second or less video about their college team.

Many NCAA schools and sports that typically don’t get much coverage will benefit from this social news coverage. Videos feature a simple Yes/No vote and are shared from the app and web site into the News Feeds of Facebook and Twitter as social news coverage. Fan Media Network will feature multiple official correspondents and Media Analysts for each team with coverage for all sports, offering multiple points of view.

Mobile journalists, former college players and fans can earn money in the app by providing social news coverage of sports news and teams in their area on their phones from their point of view. The app has a “Buy This Video” feature for newsrooms of local TV stations and newspaper web sites to buy bite size video coverage of news, games, events and moments for $50 from fans and $250 from official correspondents (trained journalists and former college players who Fan Media Network has promoted to official status) and the money goes into the mobile journalist’s bank account. The second way is fans can give money to mobile journalists in the app who they like or like their coverage, from their phone to the mobile journalist’s phone and the money goes into their bank account. Think of this as a PBS-type media model for viewer-supported news programs. Mobile journalists can use the money to help buy tickets, transportation, to upgrade their phones, services plans and to help cover other costs. The third way is brands can give influencers money for product placement in videos and or a fan testimonial on-camera on behalf of a brand and give them money from their phone to the fan’s phone and the money goes into the fan’s bank account. This is brand-to-fan mobile payments, a first in the world of advertising.

“Our social news sports network makes it easy and fun for former student-athletes to provide insight from their point of view on their phone with bite size videos. These opportunities were previously only reserved for TV and just a few select former players. Mobile phone video really opens it up. Not only will many schools and sports that don’t get much coverage benefit, but so will the fans,” said Kirk Berridge, founder and CEO of Fan Media Network.