With the latest upgrades to its mobile app, Fan Media Network, a Dallas-based startup, has almost all the product capabilities it needs to start raising advertising funds and recruiting talent.

The development process has been almost three years in the making.

“We pretty much have everything I always wanted to build,” said Kirk Berridge, CEO of Fan Media Network. 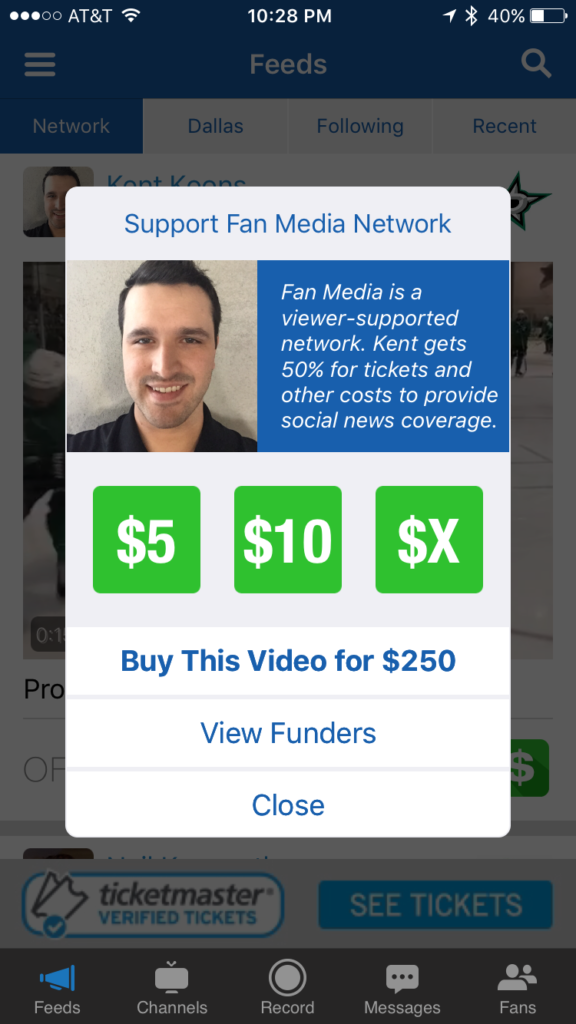 First, people who like the reporter’s content can give them money. Second, TV stations or newspapers can buy the clip to broadcast on its station or site. The cost is $50 if the mobile journalist is a fan and $250 if the person is a trained journalist or ex-player, which Fan Media Network gives official status to. The third way is through advertising.

Before this, the company had a controlled user environment where the talent has mainly been college broadcast and journalism students. Now, Berridge wants to target trained journalists who are being laid off from their jobs.

Sports media, and media in general, has seen tough times as it adjusts to consumers’ new demands. Even big companies like ESPN aren’t immune, as the sports media giant announced earlier this summer it was laying off more than 100 journalists.

“A lot of media companies are laying off journalists, good journalists,” Berridge said. “And this keeps journalism in the hands of trained journalists.”

Right now, Berridge said the company has about 25 trained, official journalists under its belt. By this fall, he wants that number to be 500. Football will be the main driver behind expansion.

Berridge thinks a year from now, newspapers and TV stations will be buying Fan Media Network’s videos and they’ll have a couple “blue chip” advertising brands on board.

Berridge sees most of the company’s revenue in the long haul coming through advertising. In the short term, partnerships with local media outlets will be the revenue driver.

When Berridge spoke with the Dallas Business Journal last year, he said he would close the company’s seed funding round and begin raising funds for Series A in 2017 Q1, but the company’s seed round is still open. Why the shift in strategy?

Read the full article on the Dallas Business Journal